Here we are, the highlight of this trip to Malaysia: the Perhentian Islands. Fine sand beaches, 28 degrees turquoise sea, coconut trees, multicolored fish, sea turtles, harmless sharks, here you are in a very exotic place !

This small paradise, in the heart of a marine park, is located on the east coast of Peninsular Malaysia.

Because of their difficulty of access and their small size, these islands have remained relatively intact: no roads, no cars, there are only a few modest wooden bungalows scattered here and there by the beach. These bungalows are among the few “mini-resorts” that provide hospitality and accommodation for tourists on site.

In short, these islands are sufficiently developed not to have to play adventurers but there is just enough to enjoy a quiet and simple way of life in a completely remote corner of the world.

If like us you are looking for peace, tranquility and rest after a a few dives during the day, go for Besar (the big one), the island is less agitated and party girl than its neighbor Kecil (the small).

It truly is the tropical paradise on earth: white sand beaches, turquoise sea, virgin forest in the background, all the indispensable ingredients of the Eden Garden in the tropics are gathered.

We always like to start off our time in a city by going to the farthest place possible to get out of the way. In the case of Lisbon, this is Belém district.

In the afternoon, wander around the trendy Chiado area before watching sunset with a view.

It is not uncommon to sometimes guess, behind this multicolored underwater forest, the silhouette of a shark. Do not panic, they are harmless!

If the fear of sharks keeps you from enjoying the ocean, you’re not alone. It’s a fear shared by millions — instilled into the public consciousness with the 1975 release of the movie Jaws, and perpetuated by films like Open Water and The Shallows ever since. However, it is also a fear that is largely unfounded. Shark-related incidents are rare. For most people, the word “shark” conjures up mental images of thrashing great whites, their open jaws lined with serrated teeth and smeared with blood. In reality, there are more than 400 different shark species, ranging from the dwarf lantern shark (a species smaller than the human hand), to the whale shark, an ocean giant that can grow to over 40 feet/ 12 meters in length. The majority of shark species are considered harmless. In fact, most are smaller than humans and instinctively avoid contact with them. Just like the timid and skittish blacktip reef shark that you can encounter in here in Malaysia.

If you still want more, enjoy a boat trip with stops in spots to “Shark Point”, “Turtle Bay”, “Coral Garden” or “Romantic Beach”. It is a very good way to discover all the facets of the island.

The Perhentian Islands also offer excellent scuba diving. They are part of the Terengganu Marine Park. The small archipelago is surrounded by about 20 scuba diving spots accessible by a short boat ride.

WHERE TO SLEEP IN THE PERHENTIAN ISLANDS?

There are very few Resorts on the Perhentians and of unequal quality.

For the island of Perhentian Besar, we recommend the resort we stayed in : The Perhentian Island Resort. The bungalows are ok, and you eat well.

Plan to spend between 20 and 30 € per night and per bungalow (for 2 people). And keep in mind that it is more expensive than elsewhere in Malaysia because it is quite touristy and the offer is limited.

HOW TO GO TO PERHENTIAN ISLANDS?

The port of embarkation is located in Kuala Besut and the tickets are bought in one of the multiple agencies of the village. The boat ride takes a little over 30 minutes.

Be careful, for the return by boat, it is usually your resort that takes care of it. You must inform them the day before you leave. There are only few hours (8am, 12am and 6pm), so if you have connections or a flight, do some planning!

To go to Kuala Besut, we took a bus from Penang (Butterworth). The journey took about 7h. But you can also go there from any other city. Just check on booking websites like www.rome2rio.com or 12go.asia/en.

The Perhentian Islands are almost completely inaccessible between November and March with irregular boats and most hotels, resorts and diving centers / clubs are closed. During the other months of the year, the islands offer a beautiful tropical climate.

Learn more in related article: Everything you need to do in Kuala Lumpur, our 3 days guide. 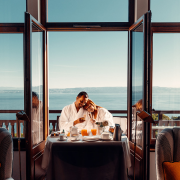 We are Elsa & Cyril, a French couple who left behind the French Art de Vivre to travel the world and chase our own dreams. Find out the rest of our story here !

Where we are now